1983 : The small 1977 built Sophie B with a capacity of 7,000 dwt would be operated by the group before becoming the La Briantais in 1988, used on humanitarian missions. 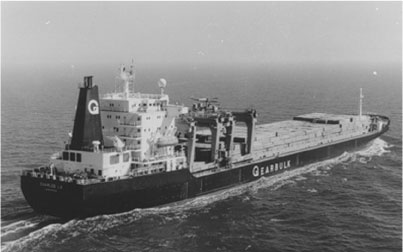 1985 : The last order from Gearbulk is placed : two 43,000 dwt vessels were launched in Korea by Hyundai: Alain LD (IV) and Charles LD (V), recognizable thanks to their seven hatches’ aperture system.

1987 : The 140,000 dwt Cetra Corona built in 1982 by Kawasaki and delivered to Cetragpa, entered the LD fleet. This same year, the group takes complete control over Cetragpa’s fleet and activities, specialized in heavy bulk transportation.