1973 : It is the year of an unprecedented diversification. Norman Lady, a gas carrier with Moss and Rosenberg tanks, is launched at the Stavanger shipyards for Buries Markes. The vessel came into service in 1976 before being sold six years later to a Bermudian company. This same year, Alain LD (II) is transferred to Buries Markes and becomes La Cordillera (III).

The Gearbulk pool is also expanding rapidly. LD invests in four 39,000 dwt to be built in Japan: Louis LD (IV), Jean LD (III), Alain LD (III) and Gerard LD (III). Having five holds and two Hagglunds gantry cranes, they are sister ships to the Norwegian vessels of this pool.

1976 : To reinforce LD’s participation in Cetramar, the 74,000 dwt Cetra Norma was launched in Yugoslavia, and equipped with eight side-rolling panel hatches.


1977 : Edouard LD, a 130,000 m3 methane carrier, is launched at Dunkirk, but would have to wait  four years for the Arzew liquefaction plant to come into service. She would be used on the Montoir-Algeria route and would prove to be complete success. 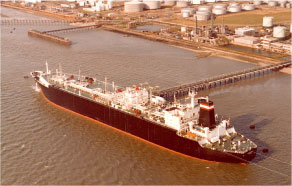 Launched as the Peter in Seville in 1976, this 30,000 dwt laker (19,400 mt intake on lakes) with seven holds and four Atiensa hydraulic cranes becomes Philippe LD (III) in 1981 before being renamed La Richardais under French Kerguelen (TAAF) register. The vessel will be employed on tramping operations including but not limited to the Great Lakes.

Capo Noli joins the fleet, and will be the last vessel of the Italian branch of the Louis Dreyfus group.