THE POST-WAR PERIOD AND THE GROUP’S EXPANSION

1947 : At the end of the war, the vessel La Pampa was Buries Markes’ sole vessel, but not for long. Another vessel delivered by William Doxford, La Cordillera, with accommodations for twelve passengers.

1948 : The vessel Empire MacDermott, used for airplane transportation since 1944, is transformed into a cargo ship and renamed La Cumbre. 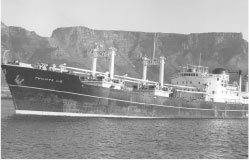 1952: Four 9,500 dwt vessels were launched in St Nazaire: Léopold LD (III), François LD (III), Gérard LD (I), Robert LD (I). They were destined to serve on regular line Plata-Golfe. The Liberty Ship Ouistreham from the Messageries Maritimes was transferred to the LD fleet in 1955.

These ships would be LD’s last “classics” to operate on regular lines with surviving vessels from World War II and the transition fleet. The Can-Con (Canada-Continent) and Can-Med (Canada-Mediterranean) lines were operated in parallel with Montship and Capo Line/GENS/Sagital. It would then be the Gulf-SA line’s (Gulf of Mexico/East Coast-South Africa) turn to be abandoned after the first closure of the Suez Canal in 1956. A few vessels were transferred to the SEAS line, the Southern America line. It will be LD’s last participation on a regular line service, however continued by its Italian subsidiary GENS/Sagital.

1955 : The brand new La Orilla(III) enters the fleet followed by another one built in 1940 by Doxford, and renamed La Barranca. A new vessel built at Saint Nazaire with a rear engine, La Pradera, is launched in 1956 and is identical to Jean LD (II) and Louis LD (III).

1956 : LD, already a partner in Montship, officially takes control over its entire fleet. All the vessels’ names start with “Mont” such as Mont Gaspe, Mont Clair and Mont Sandra which were operated by Buries Markes.